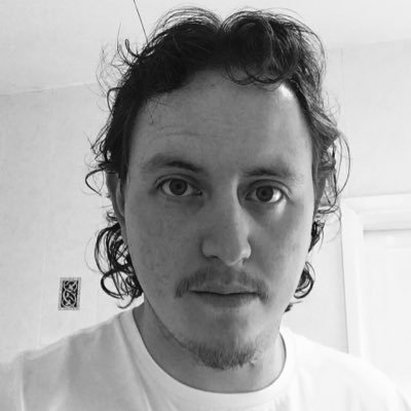 Blaidh Nemorlith (Thom Boulton) is
the Poet Laureate for the City of Plymouth.

Thom spent his childhood in Dobwalls, Cornwall attending Liskeard School and Community College before studying for Bachelor of Education (with Hons) at Rolle College, Exmouth and Plymouth University. After graduation as a Primary Teacher, Thom and his wife Clare, who is also a teacher, decided to stay in Plymouth, a city they had grown to love not least for the range of opportunities it offers. Thom and Clare each combine teaching (Thom works at Plaistow Hill Infants and Nursery School in St Budeaux) with care of their young daughter.

Thom/Blaidh has been writing contemporary poetry for twelve years. He credits his polificity to his love of words and his interest in the world. At 17 Blaidh began to write observational poetry both as a way to deal with the world and because of the joy of the process. He and several of his friends became actively involved in AllPoetry.com and would meet regularly to share their creations. During his university career, when not busy with assignments, Blaidh would listen to the Poetry Off the Shelf podcast which he believes greatly helped his development as a writer.

He continued to post on AllPoetry.com and began to win and be placed in various contests on the site. In 2011, whilst experimenting with different characters, Blaidh wrote a piece called 'Overly Stimulated' (under the guise of Gallimaufry the Ineffable) which was feature in the first issue of  the Railroad Poetry Project: available at  http://issuu.com/railroadpoetryproject/docs/issueone.  In 2015 beginning his biggest project to date Blaidh launched the Blaidh's Tales website (http://blaidhstales.weebly.com/) in order to post new pieces. The focus here is folklore and fairy tales for adults and the first 60 tales were published at the end of 2015 in Blaidh’s first poetry book. Since then, Blaidh has, in collaboration with several others, produced and published several children’s books: Malerblatt’s Tree was released on New Year’s Day 2016 and South West Legends (illustrated by Anthony Rollinson) is on sale at three locations on Dartmoor.

​Blaidh’s poem ‘Alone in Blue’ was published in the Plymouth Herald alongside an interview with Blaidh (8 Oct 2016).

Following his instatement as Plymouth Poet Laureate Blaidh performed during the Plymouth Literature Festival 2016 at various events across the city. He was placed as a finalist during the Flash Fiction event, read some of his work at The Word, Twin Sounds (Brest/Plymouth exchange) and The Big Open Mic Night. With his creative collaborator, Dorian Sounde, Blaidh performed at the auditorium theatre, Plymouth Athenaeum, with a show of his own crafting entitled In The Darkly Woods. The show was comprised of retelling of dark fairy tales from Europe, folklore poetry about Plymouth and ended with some of Blaidh’s Tales which had been converted into songs.

Blaidh is a regular attendee of Cross Country Writers, a Plymouth based poetry and prose group which meets once a month and is a supportive environment in which participants can share their work. If you want to attend CCW then contact Kenny or William via their facebook page or twitter account.